After almost a year I decided to upgrade the Operating Systems on my laptop.
The plan was to install the latest Solaris build – Solaris Express Developer Edition 1/08 (snv_79) and openSUSE 10.3 along with the pre-installed Windows XP.
I managed to get hold of a USB hard disk to take a backup of my data, partitioned/formatted my disk and installed Win XP.
This is how my partition table looks like:

Next on the agenda was openSUSE 10.3 installation.
I’ve been using openSUSE for over a year now and based on my past experience,
I was kind of expecting the installation to be fairly trivial.
Unfortunately, that was not to be :(. After few minor glitches (the installer kept crashing every now and then), I finally managed to install it.
Things I love about openSUSE 10.3 Techfest 2007 – IIT Bombay‘s Annual International Science and Technology festival began yesterday (Jan 26th) with much fanfare.
The beautiful campus near the Powai lake was jostling with Students and Industry folks alike.
Sun is one of the key sponsors of the festival and has a lot of presence during the entire three-day event –
Technical sessions (interestingly titled Sun Lectures by the TechFest folks 🙂 ),
Quizzes etc.

I was invited to talk.. err.. rather show how to develop applications for different Java plaforms – Java SE, EE and ME.
I was accompanied by Sundar, Moinak and Naveen. We reached the campus in the morning and were taken straight to the lecture hall.
The hall was packed with students and you could feel the excitement in the air.

After being formally introduced we took our seats and Naveen, who takes care of Developer Relations welcomed everyone to the event.
Since, Jan 26th happens to be India’s Republic Day, he requested the audience to start the event with the National Anthem.
It was well taken by the audience and within moments the hall was resounding with the student voices singing the Anthem.

Sundar took the first session and spoke on Java – Now and Future .
He shared with the audience some exciting features/work (Scripting support, JRuby etc.) that are currently under development and also explained the effects/benefits of open sourcing Java.

My session was titled – Building Applications for the Desktop, Web and Mobile leveraging NetBeans.
I gave a quick overview of NetBeans and delved straight into the application development bits.
The audience simply loved the ease of use side of Java.

Moinak took the last session and spoke about Solaris and its features.
He also shared with them information about OpenSolaris and BeleniX – his baby 🙂 .
Many students penned down the URLs and email addresses of various resources and OpenSolaris user groups respectively.

Later, we distributed CDs/DvDs of NetBeans/OpenSolaris to the attendees and took a stroll around the campus.
There were banners/posters of various technologies and companies all over the place.
I instantly understood what Naveen meant in the morning when he said – if you’re not here you’re not there 🙂 .

On the whole, it was an exciting first day @ TechFest, IIT Bombay.

I just came back from Sun University Days held at BMS College of Engineering (BMSCE), Bangalore and let me just say it rocked!
It was a two-day event and was attended by 150+ members (Students/Academia).
Srikanth was formally invited as the Chief Guest for the event and boy did he rise to the occasion or what.
Believe it or not – He donned a “Business Suit” for the keynote 🙂
(For those who know him would probably demand some sort of proof… please bear with me, I’ll be putting up the pictures soon)

(As promised, here are some pics..)

Anyways, it wasn’t long before he took it off and was back to being his usual self (strutting Sun apparel..).
He spoke (an understatement.. ) on pretty much everything – Java, C, C++, OS, Processors etc.
It was more of an open house in the end. This guy seems to be moving with a board and a marker pen in his kit these days. 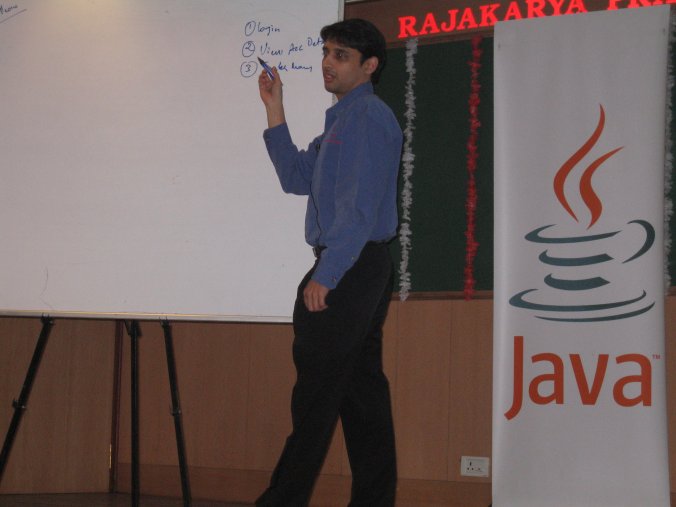 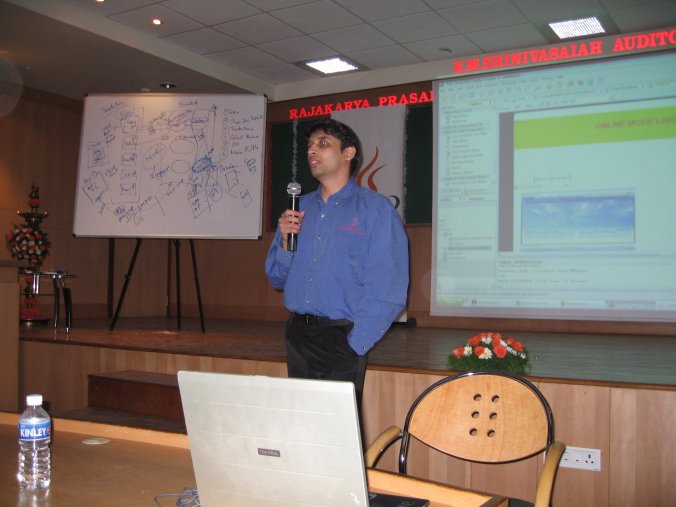 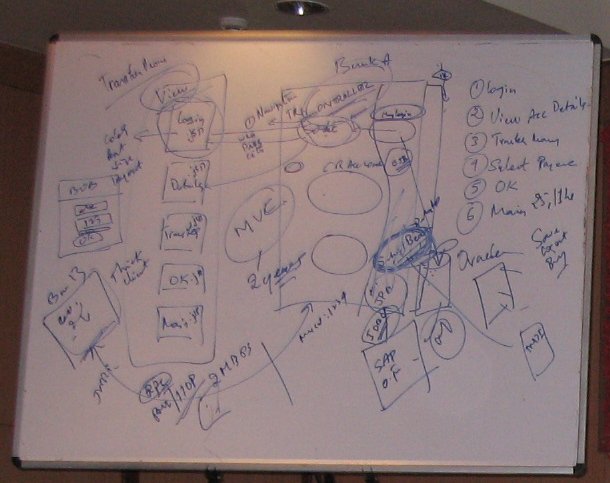 Well his enthusiasm for technology is really contagious and pretty much set the mood for the whole event.

We had promised the audience that they’ll be witnessing (as Srikanth puts it) “Magic” throughout the 2 days and I believe we did keep our word.
We had speakers from various technology teams and the presentations were interspersed with some really cool demos.

Srikanth, Myself, Amol and Srinidhi had various sessions.
Mine was the third session and I spoke on Java EE.
Based on my experience from previous interactions with students and developers I made sure that I showed
them plenty of demos based on real-life use cases.
Its always heartening to see the audience putting up questions.. it indicates that they are paying attention 🙂

Day 2: Java ME and Solaris

Amol and Srinidhi spent some good time explaining the whats, whys and hows of Java ME.
They later followed it up by developing a cool game for mobile phones.

Solaris sessions were very informative too. OpenSolaris has been getting lot of attention throughout the world (now with Google playing with it).
Bangalore is one of the places where its very active… after all the LiveCD version (Belenix) was rolled out by bunch of Solaris enthusiasts led by Moinak Ghosh of IEC.
Moinak (another ardent Asterix fan) was also present at the event and interacted actively with the students, answering queries and giving tips.
Madhu gave a really nice overview of Solaris and shared the story of how a local undergrad student has released a USB drive version of Solaris (LiveUSB).
This is a really good example of how events like Sun University Days strike a chord with the developers and ignite their interests.

We wound up the event with an open house session and answered various questions. Later, Srikanth distributed certificates to the attendees.
All in all, it was an exciting and informative event that was loved by speakers and audience alike.
The feedback we received bears ample testimony to it… and so does the picture below.

(A picture is worth a thousand words… )

Anyways, I’m almost through with my entry and have to get ready for a rigorous training session that begins in few minutes. More on that later.